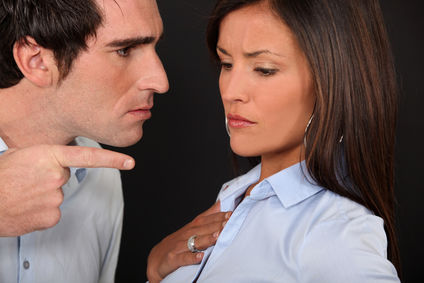 Source: Stockfresh #1617921 Couple having a disagreement by photography33

Despite having a seemingly strong personality, narcissists lack a core self. Their self-image and thinking and behavior are other-oriented in order to stabilize and validate their self-esteem and fragile, fragmented self.

Poor Narcissus
The gods sentenced him to a life without human love. He fell in love with his own reflection in pool of water and died hungering for its response. Like Narcissus, narcissists only “love” themselves as reflected in the eyes of others. It’s a common misconception that they love themselves. They actually dislike themselves immensely. Their inflated self-flattery, perfectionism, and arrogance are merely covers for the self-loathing they don’t admit–usually even to themselves. Instead, it’s projected outwards in their disdain for and criticism of others. They’re too afraid to look at themselves, because they believe that the truth would be devastating. Actually, they don’t have much of a Self at all. Emotionally, they’re dead inside and they hunger to be filled and validated by others. Sadly, they’re unable to appreciate the love they do get and alienate those who give it.

The Diagnosis
When we think of narcissists, we usually picture someone with a big, inflated ego, someone bossy and arrogant who has to be right. To be diagnosed with Narcissistic Personality Disorder (NPD), the person must exhibit grandiosity (if only in fantasy), lack of empathy, and at least 5 of the following traits:

In addition to the grandiose “Exhibitionist Narcissist” described above, James Masterson identified a “Closet Narcissist”–those with a deflated, inadequate self-perception, a sense of depression and inner emptiness. They are also referred to as Introverted Narcissists. They may appear shy, humble or anxious, because their emotional investment is in the idealized other, which is indirectly gratifying (Masterson, 2004). “Malignant” narcissists are the most pernicious and hostile, enacting anti-social behavior. They can be cruel and vindictive when they feel threatened or don’t get what they want.

Early Beginnings
It’s hard to empathize with narcissists, but they didn’t choose to be that way. Their natural development was arrested due to faulty, early parenting, usually by a mother who didn’t provide sufficient nurturing and opportunity for idealization. Some believe the cause lies in extreme closeness with an indulgent mother, while others attribute it to parental harshness or criticalness. Although more research is required, twin studies revealed a 64-percent correlation of narcissistic behaviors, suggesting a genetic component. (Livesley, Jang, Jackson, & Vernon, 1993).

Psychoanalyst Heinz Kohut observed that his narcissistic clients suffered from profound alienation, emptiness, powerlessness, and lack of meaning. Beneath a narcissistic façade, they lacked sufficient internal structures to maintain cohesiveness, stability, and a positive self-image to provide a stable identity. Narcissists are uncertain of the boundaries between themselves and others and vacillate between dissociated states of self-inflation and inferiority. The self divided by shame is made up of the superior-acting, grandiose self and the inferior, devalued self. When the devalued self is in the inferior position, shame manifests by idealizing others. When the individual is in superior position, defending against shame, the grandiose self aligns with the inner critic and devalues others through projection. Both devaluation and idealization are commensurate with the severity of shame and the associated depression (Lancer, 2014).

Although most people fluctuate in these positions, the Exhibitionistic and Closet Narcissists are more or less static in their respective superior and inferior positions irrespective of reality, making them pathological. Arrogance, denial, projection, envy, and rage are among the defenses to shame (Lancer, 2014). Narcissists defend against shame and fragmentation by feeling special through idealizing or identifying with special or important people.

A Relationship with a Narcissist. At home, narcissists are totally different than their public persona. They may privately denigrate the person they were just entertaining. After an initial romance, they expect appreciation of their specialness and specific responses through demands and criticism in order to manage their internal environment and protect against their high sensitivity to humiliation and shame. Relationships revolve around them, and they experience their mates as extensions of themselves.

Many narcissists are perfectionists. (Read about narcissistic perfectionism). Nothing others do is right or appreciated. Their partners are expected to meet their endless needs when needed–for admiration, service, love, or purchases–and are dismissed when not. That their spouse is ill or in pain is inconsequential. Narcissists don’t like to hear “No” and often expect others to know their needs without having to ask. They manipulate to get their way and punish or make partners feel guilty for turning them down.

Trying to please the narcissist is thankless, like trying to fill a bottomless pit. They manage to find fault with your efforts, or give back-handed compliments, so that you always feel one down. If they’re momentarily pleased, they’re soon disparaging, or asking for more from you. They make their partners experience what it was like having had a cold, invasive, or unavailable narcissistic parent. Anne Rice’s vampire Lestat had such an emotionally empty mother, who devotedly bonded with him to survive. The deprivation of real nurturing and lack of boundaries make narcissists dependent on others to feed their insatiable need for validation.

Partners often doubt the narcissist’s sincerity and question whether it’s really manipulation, pretense, or a manufactured “as if” personality. They feel tense and drained from unpredictable tantrums, attacks, false accusations, criticism, and unjustified indignation about small or imaginary slights. These partners also lack boundaries and absorb whatever is said about them as truth. In vain attempts to win approval and stay connected, they sacrifice their needs and thread on eggshells, fearful of displeasing the narcissist. They daily risk blame and punishment, love being withheld, or a rupture in the relationship. They worry what their spouses will think or do, and become as preoccupied with the narcissist as they are with themselves.

Partners have to fit in to the narcissists’ cold world and get used to living with emotional abandonment. Soon, they begin to doubt themselves and lose confidence and self-worth. Communicating their disappointment gets twisted and is met with defensive blame or further put downs. The narcissist can dish it, but not take it. Nevertheless, they stay, because periodically the charm, excitement, and loving gestures that first enchanted them return, especially when the narcissist feels threatened that a breakup is imminent. When two narcissists get together, they fight over whose needs come first, blame, and push each other away, yet are miserable needing each other.

Often in these relationships, narcissists are the distancers when more than sex is anticipated. Getting emotionally close means giving up power and control. The thought of being dependent is abhorrent. It not only limits their options and makes them feel weak, but also exposes them to rejection and feelings of shame, which they keep from consciousness at all costs. (Lancer, 2014) Their anxious partners pursue them, unconsciously replaying emotional abandonment from their past. Underneath they both feel unlovable. If you love a narcissist, doing the exercises and using the recommended strategies in Dealing with a Narcissist: 8 Steps to Raise Self-Esteem and Set Boundaries with Difficult People can be helpful in dealing him or her. Doing them can also help you get clarity about whether you want to stay in the relationship. To learn more about relationships with narcissists, visit www.whatiscodependency.com

Read the full professional article on narcissism, including treatment, as published in The Therapist.

Published by William A.

Blogger, Artist, Lyricist, Designer, and founder of music group Run The Game and President of Watezilla Entertainment. View all posts by William A.